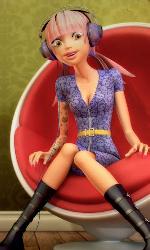 My initial idea was to go for a virtual pinup, but with the express decision not to over-sexualise her. I’ve been a fan of  Tara McPherson for a long time and although the final image doesn’t bear much resemblance to her work it did serve as a creative and directional springboard for me. I found some 60′s pinup photos of minidress clad girls lounging on the floor listening records and thought that these kind of images were iconic and fun to riff on. After more web research, the chair, headphones, tape recorder and set were quickly built and textured in less than a day and the composition was roughly laid out before doing first test poses.  —Nik Faulkner